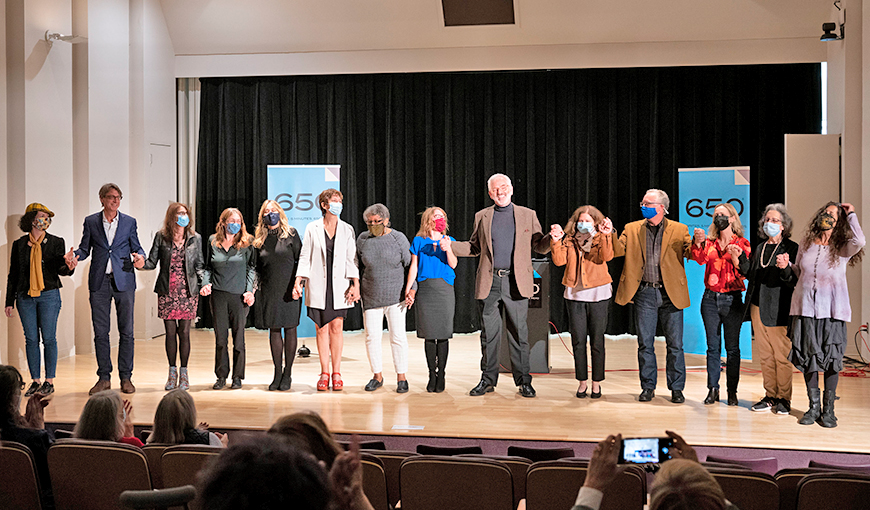 The Truly Scary Things in Life

In March 2020, when theaters went dark, Read650 was poised to present a live show at the New Rochelle Public Library. More than 18 months later, the writers’ group at long last took the stage at the library’s Ossie Davis Theater for a Halloween-themed program. I was honored to be part of the cast, reading my essay “The Haunted House,” originally titled “The Truly Scary Things in Life.” Click here to watch the show; my presentation is 8:40 minutes into the video.

Even today, everyone still remembers the haunted house. It was the main attraction at the carnivals we used to have in our backyard, which were organized by my older sister Janet and her best friend, Paula. Kids would pay a quarter to get in, play games, eat snacks, and watch Paula’s dog jump through a hoop.

It might have cost an extra nickel for the haunted house, which was up on the second story of our dilapidated garage. First, you climbed the rickety steps just to the left of where our parents parked the car. Then you were blindfolded and led through a maze past gaping holes in the wooden flooring to a big refrigerator box with two slots cut into the side.

We had to stick our hands in, and when we did, we discovered two bowls—one filled with long, slimy loops that they said were intestines; the other with wet slippery shapes that were supposedly eyeballs. And even though, deep down, we knew that one was cooked spaghetti and the other peeled grapes, it didn’t matter—we were scared of what our imaginations conjured.

Then again, there were so many things we were scared of when we were little kids, growing up in Mount Pleasant, Pennsylvania, population 5,000, in the early 1960s. For starters, the monsters that hid behind the furniture, waiting to come out when our parents turned off the lights. We were afraid to swallow chewing gum. We believed what we were told—that if you accidentally ate a watermelon seed, it would sprout in your belly. If you stepped on a rusty nail, you’d get lockjaw. If you went swimming less than thirty minutes after eating, you were a goner because you’d get cramps and drown.

Meanwhile, our lives were filled with dangers we didn’t even dream about; neither did our parents. Our houses were insulated with asbestos. Radon seeped up through the basement. We drove around in fuel-guzzling clunkers that our parents filled with leaded gas, which was something we looked forward to because we got to inhale those sweet benzene fumes. Every summer, the seven of us piled into the family station wagon in the middle of the night to drive over three hundred miles to the Jersey shore, and no one wore a seat belt. We believed in tanning lotion, not sunscreen, and Dad still smoked.

It was a kind of freedom—or stupidity—almost unimaginable today. In the summer you could hop on your bike in the morning—naturally, without a helmet—and be gone until dark. We’d ride out to the reservoir at Bridgeport, three miles outside town, and spend the whole day swimming without a lifeguard. Some of the boys raced their bikes up and down the scrambling patch, which was made out of toxic red slag from the decommissioned coke ovens. Our parents just assumed we were safe.

Recently, I got to thinking about the haunted house because Halloween will be upon us soon. People will pay a lot of money to go to commercial venues that attempt to approximate the natural horrors of our garage, which was a falling-down wreck from the day my dad bought our house in 1951.

There were cobwebs on the windows, bats above the rafters, mice nesting in the woodpile, a heap of rusted garden tools, an ancient gas-powered lawn mower, banged-up metal trash cans, Huffy bikes with back-pedal brakes, and stacks of moldy newspapers.