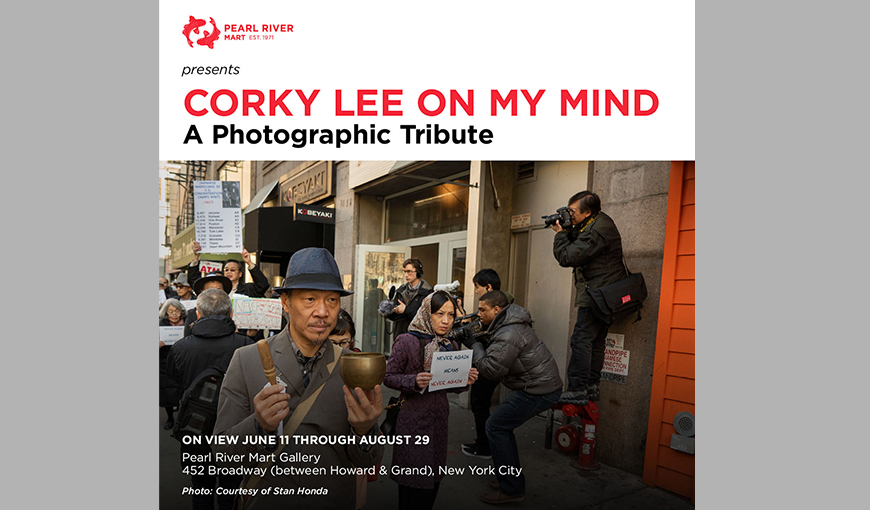 For 50 years, Corky Lee showed up whenever and wherever Asian Americans were making news, using his camera, as he liked to say, to commit “photographic justice.” I knew him because he was a friend of my husband, Stan Honda, a photographer who has spent much of his career documenting the aftermath of the Japanese American incarceration.

Corky, seen in the picture above on a Fire Department standpipe, was always there to help out when Stan and the rest of the New York Day of Remembrance Committee organized their annual program commemorating the day when President Franklin D. Roosevelt signed Executive Order 9066, leading to the forced removal of Japanese Americans from the West Coast.

On Jan. 27, Corky died of Covid-19 at age 73. This weekend, his friends will gather for the opening of a photographic tribute at Pearl River Mart in SoHo. Company president Joanne Kwong was a longtime admirer, hosting an exhibition in 2016 of 62 of Corky’s pictures that cemented his reputation as the “undisputed, unofficial Asian American photographer laureate”—the slogan on his business card.

Both Corky and Joanne were ABCs—American-born Chinese—looking to preserve the heritage of their ancestors while adapting to modern times. I wrote a bit about their generation of activists and entrepreneurs when I did a story for the Associated Press about the Nom Wah Tea Parlor, which celebrated its 100th anniversary last year.

Chinatown has always been one of my favorite parts of the city, a vibrant, bustling, food-obsessed neighborhood that inevitably brings back memories for me of my Jewish immigrant forebears. Ever since Stan and I moved to New York more than 30 years ago, we seem to end up there on most major holidays or whenever we have a craving for dim sum.

A lot of times, Corky was with us too. As Joanne said in her heartfelt obituary on the Pearl River website, “The Asian American community has lost a pillar, a legend, and a witness to history. Rest in power, Corky. Thank you for being you.”

The exhibit will be on view June 11 through August 29 in the Pearl River gallery at 452 Broadway between Howard and Grand. An artist meet-and-greet will be held on Saturday, June 12, from 2 to 5 p.m.