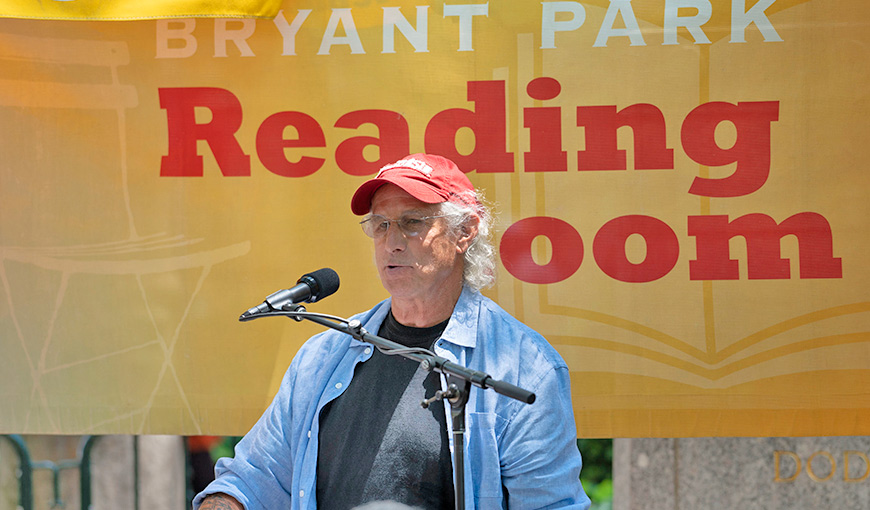 This is the first in an occasional series of conversations with writers and other artists about why we do what we do.

A few weeks ago, a friend of mine, Steve Lewis, sent around a poem about what it’s like as a writer to confront the blank page. For him, looking back over a long, successful writing career, it wasn’t terrifying at all. On the contrary, he saw it as an inviting space where all manner of secrets might be revealed, an “undiscovered room” or “virgin forest,” “some place to sit on a downed log and say `Oh.’ Not `Aha.’ Just `Oh.’”

I emailed him immediately to tell him how much I liked it, adding that I found it amazing that he’d never struggled with the blank page because from the very beginning, that’s all it’s ever been for me—wondering if the Muse would show up and have anything interesting to say. He replied right back with characteristic modesty that his “relatively undaunted approach to blank spaces speaks more to my stumbling, bumbling approach to life than anything admirable.”

Of course, that’s not true! You don’t get to where Steve is—with a “biblically long” list of published essays, novels, and poetry—by stumbling and bumbling. The reality is, he’s one of the fastest, most prolific writers I know. And one of his favorite topics is the process of writing itself.

In an essay called “Breaking Into Blossom”—after a poem by James Wright—he called it “a nagging hunger to enter into the unknown and give it form and language.”In a poem last December on Instagram titled “Changing the Name of Things I,” he described it as “putting words up on a screen and … taking them down, replacing them with other words.” And in another essay, “The Fifteen-Minute Novel,” he calculated how long it would take to produce a first draft by writing just fifteen minutes a day—a mere forty weeks, not counting the rewrites.

Recently, we were on a program together in Bryant Park organized by the writers forum Read650, where he is a senior editor and literary ombudsman. His essay was called “Fame, Fortune, and a Purposeful Life,” and it was about how his decision to become a writer was deeply disappointing to his father, who ran a wholesale school supplies business on Long Island.

I recognized the type: hard-working, upwardly aspirational dad, a Jew in love with the Protestant work ethic, possibly in the hopes of forestalling the next pogrom. Mine was the same, although I was never expected to go into the family furniture business, probably because I was a girl. And even though I never met Sam Lewis, I got the feeling, after listening to Steve’s essay, that all his harangues about the vital importance of “paper and pencils and flash cards” were in some hard-to-measure way responsible for his son’s success.

Sometimes we writers delude ourselves into thinking that what we do is a calling. Or a mission. Or a destiny. Or a crusade. But all those exalted notions are just going to get you in trouble. At the end of the day, writing is a job. And if you treat it like one, your dad, Jewish or otherwise, just might kvell.